Skip to content
You are here
Home > Insurance > Over Regulated: Insatiable appetite for legislation… 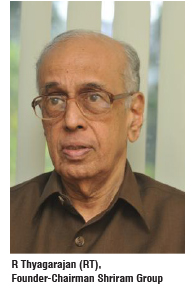 “The insurance sector was opened up in 2000. Even 18 years after, the industry has not recorded decent growth or penetrated deep, despite the big potential. A major reason was too much of regulation as in several other aspects of governance,” said R Thyagarajan (RT), Founder-Chairman of the Shriram Group.
Speaking on Protecting Business – Delivering Value at a recent event of the Madras Management Association he pointed out: “mindless regulations slow down development, contribute to performance far below potential and curb initiative. There is no need for a bulky 350 pages of rules for regulating the sector,” said RT. He contrasted the approach of China where the business came first and regulation followed. “In India, we take a lot of efforts to regulate before starting business!
With such regulation the business of insurance is suffers three serious risks – no insurance, inadequate insurance or choosing an improper cover,” said this insurance expert who promoted Shriram Life Insurance Co., Shriram General Insurance Co., and Bharate Reinsurance Brokers among several other finance companies.

T L Arunachalam, Director-Global Strategy & Special Projects, Bharat Reinsurance Brokers, made a detailed presentation on cyber risks. RT referred to the insatiable appetite for legislation unmindful of their need or enforceability, so eloquently described by eminent jurist N A Palkhivala in 1991. The observations of this ‘God’s gift to India’ appears still so relevant! We reproduce the address.

On 25th January 1991 the Income-tax Appellate Tribunal completed fifty years of its existence. On its Golden Jubilee it is but fair to record that it has won golden opinions on all sides throughout the half a century that it has functioned. There is no doubt that over this long period, the Tribunal has been manned by some very able individuals. Quite a few of them were fit to adorn any High Court Bench. No other Tribunal in India his won such well-deserved popularity and confidence of the public as the Income-tax Appellate Tribunal.

The problem of tempering power with justice

Administrative justice demands compromise. There is no pre-determined solution to the problem of tempering power with justice. The Tribunal has rightly earned the reputation of tempering judicial power with justice. It has evolved a cheap, quick and informal procedure for doing justice as between the State and the citizen, to the great satisfaction of the litigating public. In other words, it has acted as a Court of law in everything but name, while avoiding the regular process of civil law which is too cumbersome, technical and expensive.

The work and reputation of the Income-tax Appellate Tribunal afford a striking illustration of what Professor H W R Wade said at the end of his book ‘Towards Administrative Justice!’

“No class of people stands to benefit more in the long run from just administration than the administrators themselves, because the State is permeated from top to bottom with the truth that government depends upon the approval of the governed. Fair play in administration will enlist the citizen’s sympathies and will enormously reduce the friction with which the machinery of government works. All good administrators should take care that the machinery is properly tended and that the lubricant of justice is supplied in the right quantity at the right points.”

On this happy occasion I would like to deal with one topic to which I attach the greatest importance from viewpoint of the nation’s progress and well-being and which I have been emphasizing and re-emphasizing over the last thirty years.

Mutilated by more than 3300 amendments in 30 years…

Today the Income-tax Act, 1961, is a national disgrace. There is no other instance in Indian jurisprudence of an Act mutilated by more than 3300 amendments in less than thirty years.

Simple provisions like Sections 11 to 13 (which deal with an exemption of the income of charitable trusts) have suffered no less than fifty amendments.
The tragedy of India is the tragedy of waste – waste of national time, energy and manpower. Tens of millions of man-hours of tax-gatherers. tax-payers and tax advisers – are squandered every year in grappling with the torrential spate of mindless amendments. The feverish activity achieves no more good than a fever.

The cardinal error of our times is to mistake amendment for improvement and change for progress. The Finance Ministry has become almost pathological in its “change mania.” A stable fiscal policy is to a nation what a stable family life is to an individual. But stability is anathema to the North Block. The obsessive attitude that the exercise of power must take the form of churning out new laws and regulations is shared by the legislature and the rule-making authority alike. It has become normal to have amendments to Income-tax Rules more than half a dozen times in a single year. Various Forms are changed overnight. Can this country, where crores of school children and adults have to go without writing paper, afford the luxury of throwing away millions of pages of printed Forms which are consigned to the scrap heap so nonchalantly?

Year after year, the Finance Bill continues the fatuous tradition of introducing experimental provisions some of which are truly whimsical and most of which need amendment in a short time. We legislate first and think afterward. Sections are introduced which never come into force because they are repealed or substituted before the date they are scheduled to come into operation. In the event, complexity is heaped upon the complexity and the confusion becomes worse confounded.

Legislative work expands so as to fill the time available for its completion. This is a branch of Parkinson’s Law and its operation has caused Parkinson’s Disease in the body of our fiscal code.

At an International Tax Conference held in Singapore a few years ago, the experts pointed out that a tax administration which disposes of appeals promptly and reaches a fair and final settlement speedily is itself be classed as a tax incentive. The deplorable record of India in this connection was cited as a warning. The avalanche of ill-conceived changes and complications, which may be compendiously called “legal litter,” is mainly responsible for the poor quality of our tax administration.

In the United Kingdom there are less than 29 million income-tax payers but the number of references filed in the High Court is only around thirty in a year. In India there are only five to seven million income-tax payers but the number of references filed in our High Courts is around 6500 a year, in addition to about 1500 writ petitions. These figures reflect the tremendous public dissatisfaction with the quality of the law and of fiscal administration. Our Law Reports bear witness to the fact that generally a case reaches hearing in the High Court in twenty years and in the Supreme Court in thirty years, after the relevant assessment year. The situation is continuously aggravated by the deluge of new amendments – the indigestible verbiage; and the flood of litigation is heavier today than ever before.

One vast vision of imbecility…

G K Chesterton, in his brilliant essay “The Mad Official”, analyses how a society goes mad. The rot begins, he says, when wild actions are received calmly by society. “These are people that have lost the power of astonishment at their own actions. When they give birth to a fantastic passion or foolish law, they do not stare at the monster they have brought forth… These nations are really in danger of going off their heads en masse, of becoming one vast vision of imbecility.” India is one such country in respect of budgeting and fiscal laws. Today the monster of our direct tax structure has become more monstrous than ever before.

Anaesthetised patience of the Indian public

Two things strike the student of Indian income-tax law with trepidation and amazement – the precipitate and chronic tinkering with the law by bureaucrats who are the unacknowledged legislators of India and the anaesthetised patience of the Indian public. Truly, we Indians are a “low arousal” people. We endure injustice and unfairness with feudalistic servility and fatalistic resignation. The poor of India endure inhuman conditions which would have led to a bloody revolution n any other country. The rich endure foolish laws and unending amendments which benefit none except the legal and accountancy profession and instinctively prefer to circumvent the law rather than to fight for its repeal.

No sense of time: Kal denotes both yesterday and tomorrow!

One of the main reasons for India’s backwardness and stunted development is that we as a nation have no sense of time at all. We are individually intelligent and collectively foolish. It is characteristic of us that in our national language the word ‘kal‘ is used both to denote yesterday and tomorrow. I attribute this absence of time sense to two factors. We were the first country in the world to evolve the concepts of eternity and infinity: against the backdrop of eternity what does the waste of even several decades matter? Secondly, we were the first to evolve the doctrine of reincarnation: if you waste this life you will have several ‘more in which to make good.

A telling example of the total absence of a sense of time in our tax administration is afforded by the Supreme Court’s decision rendered last November in the case of Sutlej Cotton Mills vs. CIT (1990) 2 SCALE 931. It was a case under the Business Profits Tax Act, 1947. The accounting period was 1946-47. The amount involved was a paltry sum of a few lakhs of rupees. The High Court’s judgment was rendered in I965. The Supreme Court sent the matter back to the Income-tax Appellate Tribunal to re-hear the appeal 44 years after the close of the accounting period. Is there any other civilized country where a tax-payer would not know the quantum of his liability for 44 years?

Taxes are the life-blood of any government, but it cannot be over-emphasized that the blood is taken from the arteries of the tax-payers and, therefore, the transfusion has to be accomplished with the principles of justice and fair play.

India is waiting for a Finance Minister who will have the courage, caliber and vision to put a stop to the maddening instability of out income-tax law.
Let us never forget the wise words of Justice Hughes who observed that no democracy can survive without respect for laws and institutions, but that in a free democracy laws and institutions will command that degree of respect which they deserve.

Address of N A Palkhivala at the Golden Jubilee of the Income Tax Appellate Tribunal, January 1991.

The founder of Sankara Nethralaya (SN) and its Chairman-Emeritus who contributed so richly to the spectacular expansion of eye care in India, Dr S S Badrinath, reminisced on N A Palkhivala: “a single visit of the eminent jurist to SN made a deep impact. The single visit truly became the most important chapter in the institution’s history.” The latter bequeathed a large share of his wealth to SN.

Along with SN, the Palkhivala Foundation released a biography on Palkhivala by his friend Dharmendra Bhandari. For decades, Palkhivala strode the Indian legal profession, business and development scenes as a colossus. His oratory, courage, brilliance in legal profession has no parallel.

The entire proceeds from the sale of the biography are to be donated to SN which plans to utilise the funds to provide eye carefree to the poor and needy.