After the colourless tenures of S S Barnala and K Rosaiah as Governors of Tamil Nadu, the state has a proactive Governor in Banwarilal Purohit.

This is necessary in the context of the demise of J Jayalalithaa and M Karunanidhi, the two tall leaders who dominated the political firmament for long. With his rich experience as a member of the legislative assembly, a minister and a Member of Parliament for three terms, Purohit brings with him profound insights into administration. Add to these, he has been heading the century-old paper Hitavada, founded by Goplakrishna Gokhale; he is a trustee of Bharatiya Vidya Bhavan and a leading educationist of the Vidarbha region. 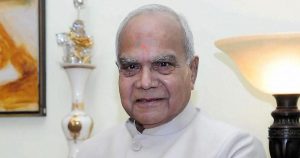 Purohit started in right earnest trying to understand the administrative issues of Tamil Nadu, the second most industrialised state after Maharashtra. Despite the howls of protest by parties in opposition, he met with officials in several districts of the state to understand first-hand its strengths and problems. Thus, in quick time, he grasped the state’s unique issues and needs. Aided by a strong secretariat at the Raj Bhavan headed by an experienced officer, R Rajagopal with the rank of Additional Chief Secretary, he has been addressing issues that have been crying for attention for long, especially in the field of higher education.

Several universities, including the prestigious Anna University, have been headless for quite some time. There was also the complaint of corruption in the appointment of vice-chancellors and the lack of oversight at the highest level. Purohit brought about transparency in the appointment of the selection committees and also in deciding quickly on the recommendations. In this, he took bold to go purely by merit. eg., his selection of M Surappa, a distinguished academic from the Indian Institute of Science, Bengaluru, as VC of Anna University despite criticism by several opposition parties.

With the new VC acting with speed, setting right several notorious and corrupt practices, there is hope for cleansing the higher education system of its deep-rooted malaise.

This focus of the Governor on clean, transparent and efficient administration makes one believe in the state winning back its past reputation for probity, integrity and quality. These features were once the hallmark of administration of reputed educationists like Dr M Anandakrishnan, Dr E Balagurusamy, Dr S P Thyagarajan…

Purohit has initiated cost-cutting measures at Raj Bhavan and plugged leaks on expenditure in respect of travel, fuel, electricity, catering, and housekeeping. These have reportedly reduced the expenses on these heads by over 80 per cent from the time he took charge in October last. His opening of the Raj Bhavan for the public is another welcome step.

A rich and varied fare

One could see the stamp of Purohit in the celebration of the Independence Day. The reception he held on I-day this year was different. There was a short speech by the Governor followed by a variety of cultural programmes. There were presentations by two Padma Bhushan awardees – renowned Carnatic musicians violinist T N Krishnan and mridangam maestro Umayalpuram Sivaraman; traditional Bharatanatyam, Karagattam and Kavadiattam; evocative music by artistes from the North India Cultural Centre and short video presentations on the speeches of DMK founder C N Annadurai and Netaji Bose and the lilting mile sur mera tumhara. A rich and varied fare! I remember former Speaker K Rajaram’s comments on the Governors serving the same pakoda and cashew cake! This time Purohit provided a sumptuous fare of sweets and savories!

Credit should also go to the master of ceremonies, Rajagopal, who made crisp, short announcements. – SV