All over the world, except for oil exporting countries, petrol and diesel are taxed heavily. There are about 55 countries where petrol is sold above Rs.100 per litre with the highest being Rs.153 per litre in Hong Kong.

The Congress Party organised a nation-wide bandh on 10 September to protest against the price rise in petrol and diesel. It claimed that NDA has ‘looted’ Rs.11 lakh crore from ‘common man’ by imposing high taxes on petroleum products. Most opposition parties supported this offensive of the Congress Party.

Coinciding with this development, India Today’s article titled, “ Why Indian government exports petrol at half the price we pay,” has caught the attention of the public.

To be expected, the NDA blames the price rise on international oil price increase, devaluation of rupee and also points the finger at state governments whose taxes increase with oil price unlike that of the Central government.

Because of these different developments, it is but natural that there is total confusion over the why of the high price of petrol.

During the UPA rule, between 2005-06 and 2013-14, the oil marketing companies incurred a loss of Rs. 4.3 trillion by selling petrol and diesel below cost. The NDA government collected additional revenues of Rs. 4.4 trillion during its four-year rule. NDA was able to do this by increasing duty on petrol from Rs.9.48 per litre to Rs. 19.48 and for diesel from Rs. 3.56 per litre to Rs. 15.33 per litre in small doses.

However, to refer to the collection of taxes as loot and stating that the Indian government exporting petrol at half the price we pay are perfect examples of ‘fake news.’ The implied implications of the NDA government acting irresponsibly is unfair. I am making this statement even at the risk of being labelled a NDA stooge.

All over the world, except for oil exporting countries, petrol and diesel are taxed heavily. There are about 55 countries where petrol is sold above Rs.100 per litre with the highest being Rs. 153 per litre in Hong Kong. The petrol price chart shows the product cost as
Rs. 39.21/l and total taxes at Rs. 37.09/l.

Taxes on petrol and diesel can be reduced. But it has to be followed by lowering subsidies and funding welfare projects. Or the public sector oil companies can be forced to lower prices and incur losses. No one likes paying taxes if they can avoid it. We know how a small percentage of India’s population pays income tax. How can any government provide essential services (defence, police, health, education, water supply, power…) and take up welfare projects if it does not have access to adequate funds? 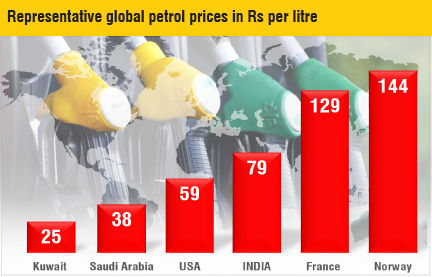 DOES the ‘common man’ consume petrol?

It is not the ‘common man’ (another fake news) who is hurt as a result of the higher petrol price as claimed by the political parties. Who is this common man?

Take India Today’s rhetorical thunderbolt. Is Indian government genuinely exporting petrol at half the price we pay by depriving the common man here? It is true the export price is around Rs 39/l, and the current price in Chennai is close to Rs 86/l. A country can tax internal consumption, but cannot tax products for export. The pundits at India Today should be aware of this simple fact.

A company like Reliance which has set up sophisticated refineries, buys inexpensive heavy and high sulphur crude oil, refines it to high value petrol and diesel and exports to profit. Currently, India has a surplus of 11.6 million tonnes (MT) of petrol and 26.8 MT of diesel and imports 13.1 MT of LPG. It is advantageous for India to export petrol and diesel to pay for at least a portion of the cost of crude and LPG imports.

Unfortunately, protesting against any petrol price by political parties has become a Great Game to gain political capital. While in opposition, NDA also played this game. Actually, it is the consumer movement, yet to take strong roots in India, that should be at the forefront to demand competition among oil companies to bring down petrol prices.

The pricing formula based on import parity adapted by oil companies has killed competition in petroleum marketing. Why should petrol be sold at the same price at all stations in every city? It should be decided by competition among the oil companies. Political parties should protest against such consumer-unfriendly practices instead of demanding a reduction in taxes, which will hurt the common man. And look at the vast differences in state taxes: VAT in Maharashtra is around 42 per cent, in Goa it is 17 per cent and in Karnataka 30 per cent on the cost of oil.

These issues should be debated not in the streets of India by organising bandhs but in the parliament and state assemblies.