Skip to content
You are here
Home > Banking > Triveni Sangam: lipstick on a pig?

Want to rescue a sick bank? Well, merge it with a healthy one. There is a convincing case for the merger of Indian banks so that they can compete universally. But a forced merger is as fatal as a forced marriage.

So three PSU banks— Bank of Baroda, Dena Bank and Vijaya Bank – will now amalgamate to India’s third-biggest lender after SBI and PNB. The brains behind this were lawyer Arun Jaitley, CA Piyush Goyal and the ‘economist’ Nirmala Sitharaman.

The move to amalgamate three banks may have instant rewards, but critical issues remain unresolved. Clearly, the government wants to take the merger route to consolidate the banking industry. This does not help overcome bad loans. Such mergers give birth to a weaker bank than the original pre-amalgamation of two powerful banks.

Industry specialists are reminding the sad stories of earlier mergers: of New Bank of India with Punjab National Bank, of Global Trust Bank with Oriental Bank of Commerce… They also point out that the bad loans of SBI enlarged after it acquired five associate banks. Former Governor Raghuram G Rajan never liked these kinds of mergers and raised the flag numerous times. He preferred merging weak banks only when their health improved.

Only proficient management minus political meddling can revitalise injured banks.

When the government proposed the amalgamation of Dena Bank with Bank of Baroda, the latter rejected it because the former healthwise has been in the Intensive Care Unit for a long time. Further, it failed to exhibit any signs of recovery. But typical of this government, it pushed the offer down the throat of the disagreeing bank by candy-coating the proposal to make it gorgeous by inserting Vijaya Bank. The added attraction, Vijaya Bank is the sole profit-making state-owned bank having the lowest chunk of bad loans. 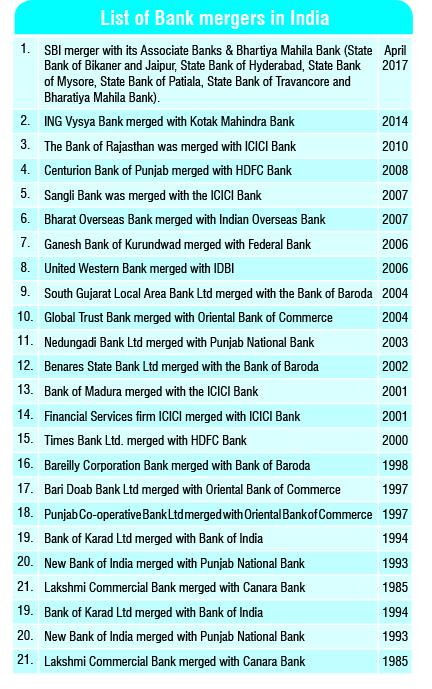 One bad apple spoils the bunch

All hope for the best in any merger and hardly prepare for the worst. According to a McKinsey study, only 30 per cent of mergers seize the presumed synergies. Research of many consulting agencies has revealed that the success rate is below 20 per cent in many amalgamation ventures.
The Gross NPA ratio of Dena Bank is among the uppermost at 22.69 per cent, while Vijaya Bank has 6.19 per cent and Bank of Baroda 12.4 per cent. The combined entity will have about 13 per cent, worse than Bank of Baroda’s present 12.4 per cent.

Many brokerage houses interpreted the merger as negative and unhelpful for Bank of Baroda and accordingly downgraded their rating of the stock.
An amalgamation with a shakier bank will hamper the recovery plan of healthy banks and it is a hindrance on their functions.

Will TriBank Sangam be Triveni Sangam?

Plentiful questions like process integration, branch rationalisation, human resource management and investors’ protection will crop up after the merger. These are important challenges and place a powerful bank’s business scheme under threat.