The latest is Witzenmann India that opened its production facility at Chromepet. The company is a specialist manufacturer of decoupling elements for cars and commercial vehicles. Vaidyanathan Chandrasekhar, President & CEO, mentioned that in the last ten years the company has manufactured more than ten million such components. The company expands the facilities to serve industrial and rail transport sectors as well. The ability of the company to customise engineering to the needs of the market is among its strengths.

Witzenmann India has two units at Kolkata and Chennai. Vaidyanathan mentioned expansion to include production of liners and hydraulic bellows. Witzenmann group is a leading manufacturer of flexible metal tubes, expansion joints, metal bellows and automotive components. It has 24 companies in 24 countries and employs over 4300. 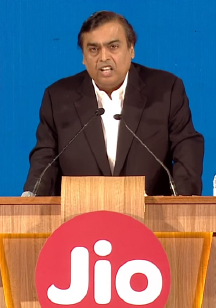 RIL – handsome profits from retail and telecom too!

It was a bold and timely decision: the Ambanis spend huge sums on the retail and telecom businesses, especially in the latter. With well-entrenched players like Airtel and Vodafone, it was a formidable challenge to gain sizeable market share. The deep pockets of Reliance Industries were imaginatively used by Reliance Jio splurging huge sums to gain entry and build business in quick time. The bold plan to offer the service free at the entry point helped lowering telecom tariff across the board. Though appeared a big gamble, it seems to have helped build a large customer base in quick time. With 252 million customers Reliance Jio already accounts for about a quarter of telecom custom.

Quite interestingly the strategy has also proved profitable. The company posted a handsome profit for the quarter ended September 2018 of Rs 681 crore (for the July-September 2017 quarter, Reliance Jio reported a loss of Rs 271 crore).

Equally impressive was the company’s proving the success of its huge involvement in the retail business which reported an operating profit of Rs 1244 crore for the quarter. Mukesh Ambani should have been deeply impressed by the dominance of Walmart in the global retail business. Walmart continues to remain the corporate with the largest revenues for several years now. For 2017 these crossed $ 500 billion. With the large industrial conglomerate, the Aditya Birla Group, moving out of the retail business, the contrast is so glaring!

RIL’s traditional business of petrochemicals including oil refining, continued to account for the lion’s share, accounting for Rs 8120 crore in the total net profit of Rs 9516 crore.

For comparison, the revenue earned by Reliance for the quarter July-September 2018 of Rs 1.56 lakh crore is about the size of Tamil Nadu’s total revenues for the year!

As in telecom and retail sectors, the aviation sector is also witnessing consolidation through mergers.

In the light of increasing operating costs and fierce competition for custom, managing airline companies profitably is becoming complex. The cash rich Maran brothers ventured into civil aviation by acquiring Spicejet, but soon found the business not taking off. They handed the company back to the original promoter Ajay Singh.

Naresh Goyal of Jet Airways took the company to great heights and in quick time. For a while Jet was flying high with increasing market share. But facing severe competition from the budget airline IndiGo, Jet has been losing market share and also incurring losses.

The going in recent times has indeed been tough with mounting losses and more fierce competition. With recurring losses (for the first quarter April-June 2018 they were at Rs 1323 crore, nearly 22 per cent of revenues of Rs 6010 crore), the company resorts to delaying salaries and defaulting payments due. Promoter Naresh Goyal, who holds a 51 per cent share in equity, is reportedly exploring the prospects for a sell off.

The Tatas, which originally set up Air India, which it lost due to nationalisation, have been keen to re-emerge a large player in civil aviation. The tie-up with highly successful budget airline Air Asia was soon followed by setting up a full services airline, Vistara, in collaboration with Singapore Airlines. But the growth has been slow; Tatas have not made much impact for their airline services. Taking control of Jet Airways would help Tatas emerge a strong player in the civil aviation business. Tatas would expect Naresh Goyal to hand over total control and management to them. The reputation of Jet Airways for offering reasonable quality of service, it’s brand value and the vast network, including services to foreign destinations are among its attractions.

The moot question is whether Naresh Goyal will reconcile to playing second fiddle.