Skip to content
You are here
Home > PetroPricing > Diesel, no more a sacred cow

TRADITIONALLY TAXES AND duties on diesel and petrol form a major share of their consumer price. Their consumption is very large and has been increasing steeply over the years. And with the ease of collection, these are easy targets for revenue mobilisation. Petrol, consumed by the better-off sections of the society like air travelers and users of cars and two-wheelers, has been routinely the target for higher revenues. 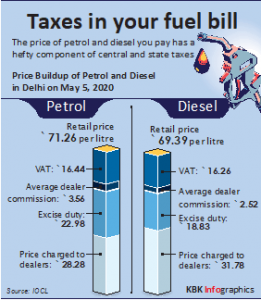 For decades diesel was widely used by agriculturists and industry, as electricity was not made available for all; again, diesel was a vital fuel for powering the railways and road transport. This had impacted the cost of transportation of goods. Thus, taxes on diesel were kept much lower than on petrol. For decades, the price of diesel was much, much lower than that of petrol.

Car manufacturers were quick to benefit from this difference. They focused on improving the efficiency and fuel consumption of diesel cars. This resulted in a big increase in the share of diesel cars in total car sales. Then came the concern for environment: diesel cars emitted much higher levels of noxious fumes and the tide turned against diesel.

When the regime of administered prices of petrol and diesel ended, one witnessed a narrowing of the price difference between petrol and diesel. The Covid19 lock-down had impacted transportation severely. Automobile sales during April were zilch. Oil companies have been reporting unprecedented fall in sales. The prices of crude and petroleum products have nose-dived across the globe. India quickly built it reserves to full storage capacity and the country is not able to benefit by purchasing more at such low prices.

In developed countries like the US consumer prices are related to global crude prices. The American consumer today pays around $1.50 per gallon (3.8 litres). In the past US gasoline prices had ruled even over $3.50.

With revenues not expanding to targets and expenditure ballooning, governments, both at the Centre and the states, have not been able to forego revenues from petrol and diesel. The Centre and a few state governments have been increasing the taxes on diesel and petrol even while there are expectations on a downward adjustment in line with the fall in crude prices. Look at the latest: Delhi government effected an increase of Rs 1.67 per litre for petrol and a whopping Rs 7.10 per litre on diesel. This has made, for the first time in decades for near parity: the price of diesel is just Rs 1.87 lower than that of petrol!

The Covid19 has proved that the ways of pandemic are inscrutable.