Skip to content
You are here
Home > Investment > The Franklin fiasco

NOBODY SPOTTED IT coming. 23 April was a sleep- less night for many debt fund investors due to Franklin Templeton MF’s announcement of the closure of its six debt funds. It was a big knock back for investors. 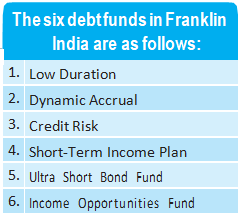 Templeton is India’s ninth-largest MF with average assets under management (January to March 2020) of Rs 1.16 trillion. Because of its robust history, nobody expected the fund house to say goodbye to some of its debt schemes.

Templeton has decided to disallow all purchases or redemptions through SIPs, STPs and SWPs. Therefore, an existing investor can no longer redeem his money and investment will be locked in these funds until the fund house turns around. COVID-19, steep drop in liquidity in the bond markets and massive redemptions forced the fund house to wind up its six debt funds with total assets under management (AUM) of Rs 25,856 crore. All six schemes had high exposure to low-rated debt securities, which have been squeezed by the pandemonium in the bond market.

On the whole, investors of debt funds get a yield between six and nine per cent. However, debt funds of Franklin Templeton stayed ahead in the race for long due to the fund house’s strategy of investing in operate bonds of low-rated corporate entities. This strategy works when the economy is flourishing, not during a recession. Many other fund houses followed the stratagem and invested in shaky corporate houses, like DHFL, Essel Group, Reliance Group (Anil Ambani), Yes Bank and Vodafone-Idea.

Franklin Templeton was the solitary moneylender to 26 of 88 corporate bodies in its debt mutual funds. This raises the million-dollar question: ‘where were the regulators?’ According to sources, 26 entities borrowed Rs 7697.27 crore, which is 100 per cent of their borrowing, only from Franklin Templeton.

Three entities have borrowed 90-100 per cent of their overall borrowings amounting to Rs 2411.52 crore and fourteen institutions had borrowed more than 50 per cent and up to 90 per cent of their overall borrowing amounting to Rs 9601.07 crore. At some time later, the Infrastructure Leasing and Financial Services (IL&FS) disaster drastically reduced the liquidity in the market. This tragedy compelled many other companies to default on their interest and principal payments. Unfortunately, a large number of such corporate organisations weren’t absent in Templeton’s portfolios.

IT WILL BE A PROLONGED WAIT…

Surely it will be a prolonged wait for wedged investors. They haven’t yet got the signal about getting their investments back. The fund house isn’t yet ready with a clear road-map, although it has said that details of the winding- up process will be communicated to existing investors of the funds and mercifully, they won’t be charged any investment management fee. Even though the fund house announced it would repay the money to the investors in less than a year, only 26 per cent of the portfolio matures next year. It won’t be easy to sell illiquid papers if the market doesn’t recommence normality.

It may take a minimum of six months to witness the economy returning to normalcy. Investors of Franklin Templeton will be quite fortunate if they can get their invested money back without any loss in the next six months. COVID-19 lock-down and a shadow banking calamity have mainly contributed towards economic adversities. As a result, many financiers had to take a hair- cut on their debt exposure of defaulting corporates and, therefore, the probability of sizeable loss for Templeton investors can’t be completely ruled out.

A week after Templeton closed its six debt schemes; the RBI announces a special liquidity facility of Rs 50,000 crore for MFs. This does make us recall the scene of the police force’s entry in Bollywood movies after the criminals flee!

The scheme is available till 11 May 2020 or up to the employment of the allocated amount, whichever is earlier. RBI will appraise the timeline and amount, depending upon market conditions. Even though the RBI has taken action, whether the liquidity support will bring back confidence in the minds of debt fund investors and discourage them from redeeming their investments is the big question mark. 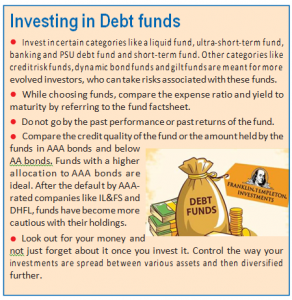 Although the RBI marched in to prevent spread of toxicity to other debt schemes, the Association of National Exchange Members of India (ANMI) has insisted that the Finance Ministry and SEBI should appoint a high-power committee to take over Franklin Templeton’s management. The brokers’ body also is of the same opinion and has requested for Franklin’s investment judgments to be scrutinised.

The lock-down of debt funds of Franklin Templeton may spread to debt schemes of other mutual funds. Immediate action is warranted to check this and a UTI type of bailout will be a good option. A Yes Bank type of liberation pack- age could also be considered by the mutual fund industry to save itself from this financial corona- virus.