Tamil Nadu was the earliest among states to tackle the Covid-19 pandemic. Chief Minister E K Palaniswami assisted by TN Minister of Health and Family Welfare, Dr Vijaya Bhaskar and a prized team of senior civil servants, acted fast. Capacities available with the government and private hospitals, educational institutions… were quickly mobilised and augmented. Importantly, the administration ensured private hospitals conformed to the norms, standard operating procedures and prescribed charges. The state leads in testing, curing and in low mortality. Around Rs 7500 crore has been allocated for managing the pandemic. And testing, treatment, medicare, food… are all offered FREE!

Even while we were settling down to the changing routine of lockdown and work from home, came a bolt from the blue: in the first week of August both my wife Padma, a whole-time Director in the company and myself had fever. I reported to Dr R Venkataswami, who pioneered microsurgery in this part of the country and a well-wisher of our family. A consultant at Apollo Hospitals, Dr RV arranged for tests the next morning. By the end of the day test reports showed both of us infected with Covid- 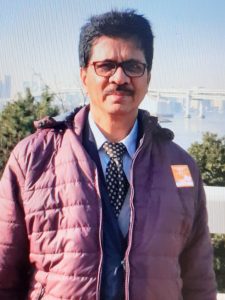 19.
Initially, we were advised to quarantine at home for a week from 07 August. When I informed Additional Chief Secretary- TN Finance, S Krishnan, another family friend, he advised immediate hospitalisation; he arranged for getting us admitted into the Covid Hospital at Guindy which was inaugurated just a couple of weeks earlier by the Tamil Nadu Chief Minister.

A well-equipped new hospital at guindy
As one working at the Guindy Industrial Estate for four decades, even I was not aware of this new facility. The Chief of the hospital, Dr K Narayanasamy (KN) arranged to pick up and register us for treatment the very next day (07 August).
The standard operating procedures were quite impressive: after quick registration ECG, lung CT scans and blood samples were taken. We were transferred to an airy room that had provision for continuous supply of oxygen, intravenous medications…
Results of the tests showed Padma with a mild attack, but self with lung infection.
Over the next ten days a strong team of doctors, paramedics and other support staff continuously monitored our conditions, conducted regular tests, administered several medications through IV transfusions which included antibiotics and antiviral medicines, steroid pills …. Temperature, oxygen, and blood sugar levels were continuously monitored. Padma recovered very quick and lent me additional 24×7 care and support. Carefully-crafted diet with rich protein supplements through dhals, fruit juices… and kabasura concoction were big help.

Some anxious moments…
A week later with the spread of infection there were some anxious moments. Oxygen support took care of breathing. There was the urgency for a quick decision – to undergo plasma therapy or not. The hospital had an offer of a dose of plasma made available by the Government General Hospital.
I checked with Dr RV and my children in the US and Hong Kong working for insurance, healthcare and pharma giants, who also consulted some specialists in the US. There was wider appreciation of the efficacy of plasma transfusion from cured Covid-19 patients. Dr R V was not in favour as also heart surgeon Dr K M Cherian, another close friend of mine who lost his wife despite plasma transfusion just a couple of days earlier.
Dr Cherian insisted on knowing the donor’s compatibillity. So we declined the offer. Later I found from the discharge sheet, expensive, state-of-the-art medicines including remdesivir, enaxoparin(a blood thinner), steroids…. were liberally administered.
There was remarkable response from the following day. Infection levels dropped dramatically and the oxygen level tended to stabilise at a healthy 95.
From then the improvement was continuous. After two weeks of hospitalisation, the stabilisation of oxygen level was monitored during the next three days. Satisfied with the stable condition, Dr Narayansamy decided to discharge us on 24 August.
The chief, with a contingent of specialists, was regular in his visits and expressed satisfaction over continuous improvement. Several specialists were likewise regular in checking the parameters and making needed corrections. There was sound advice on nutrition, breathing and yoga exercises. KN handed me a couple of balloons and advised my inflating these at regular intervals to exercise the lungs and also to think positive.

Tests and more tests…
At regular intervals blood samples were collected for culture and analysis. Regular testing for blood sugar and oxygen levels helped timely corrections.
While the cure through a vaccine is still months away, the effort was to contain the spread of infection. For this, regular administration of antibiotics and anti-viral medicines was done through intravenous infusions. For aged persons, locating a vein and inserting a prickline (Peripherally Inserted Central Catheter) is not easy. This necessitated periodical re-setting of the prickline.
IV infusions were made through this prickline. On the days when the infection was peaking, infusions were needed at least thrice a day each extending an hour or two. The insfusion of so much liquid through late hours resulted in frequent urination; sometimes at intervals of 30-60 minutes which impacted sleep. But the team effectively administered a wide range of medicines for corrections. 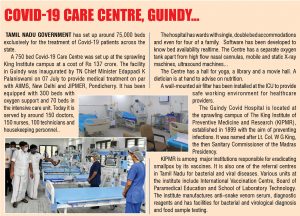 Attention to nutrition…
A lot of attention was also paid to nutrition. The breakfast, the lunch and the dinner served at fixed times were tasty and of quality and variety. For me, the food rigour initially appeared heavy. When I pointed to this, a doctor reasoned : “you don’t complain the palatability of the medicines. This is necessary to keep you healthy.” So true! I adjusted and complied.
There were regular supplies of roasted gram/peanuts, variety of sundals,Kabasura kudineer, other herbal conconcoctions, fruit juices…Good lessons we adopted for normal, healthy eating.

Covid-19 warriors…
Doctors, paramedics, sanitation staff and others involved were all gleaming in personal protection equipment (PPE). It was difficult to recognise these despite their regular visits. KN was kind in announcing himself!
I noticed a rigorous schedule of work for these Corona warriors. These were on duty for a week with boarding and lodging in the premises followed by a week to return home. With most of the paramedics recruited from across the state, many opted to stay in the city leaving families far away. I imagined the difficulties of getting out of the PPE for quenching thirst or for attending nature’s call.
There was also close attention to hygiene, with the sanitary workers frequently mopping and disinfecting floors.
We were totally cut off from visitors and the outside world. Broadband and telecom connectivity to interact with children and friends were precious boons. 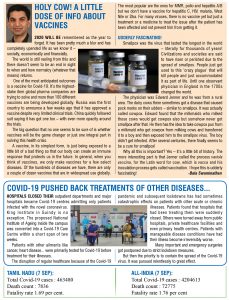 The ‘positive’ doctor…
Chief Dr Narayanasamy, along with a team of specialists, was regular in visiting patients. After checking the parameters he found time to provide pep talks that acted as morale boosters. The simple tips were quite effective: like periodic inhaling through the evaporiser with a few drops of eucalyptus. He also handed a couple of balloons advising me to inflate them as an exercise for lungs. His suggestion to sleep on the stomach, though was difficult initially, was a big help in exercising the lungs.
This MD with a doctorate in gastro-enterology has been teaching, treating patients and researching at the Madras Medical College for three decades. He has presided over national and international medical conferences, published a number of papers and is receipient of several awards.
Deputing KN as the Director appears a great and auspicious start for this new Covid care centre.
Yoga and naturopathy experts in the team also taught us simple breathing exercises. There was thus holistic attention to clear the lungs of infection.

All offered free!
An aspect that was surprising was in offering this life-saving treatment free! In contrast to the experience of private hospitals collecting in advance cost of medicines, tests… right at admission, there was no mention of cost during our stay at the hospital. We were discharged and dropped back home. Even then there was no mention of cost!
We gathered the government has been meeting the entire cost of treating Covid patients!
It is learnt the TN government had budgeted around Rs 7500 crore for Covid care treatment. The alert administration also ensured handsome savings in costs by effective controls. A senior official pointed to getting the cost of personal protection equipment (PPE) reduced from the initial Rs 2000 plus per piece to Rs 300 now!
My children, wife and myself hope to discharge the conscience debt. 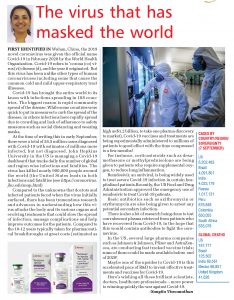 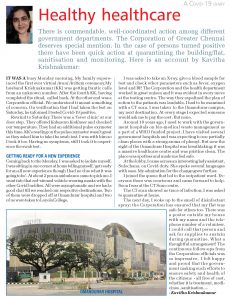