In 1979, after two decades of production, Ashok Leyland was still dawdling along with a modest capacity of just around 10,700 medium and heavy vehicles. Capital investments were modest. Sales were at Rs 135 crore and net profit: Rs 6.91 crore. Competitor Tata Motors (then TELCO) had capacity of around 40,000. Look at the vision and audacity of R J Shahaney (RJS) who took charge of AL in 1978. 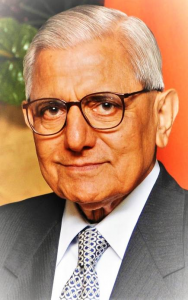 Shahaney conceived AL’s expansion of capacity by 40,000 vehicles at three new locations at Hosur (Tamil Nadu), Alwar (Rajasthan) and Bhandara (Maharashtra). The finances of Ashok Leyland (AL) were not in great shape with British Leyland, that held over 70 per cent of shares was on the decline and not in a position to invest big in the Indian operations. There was also the limitations of institutional and bank funding.

RJS took charge as MD in 1978 and served AL for over 34 years until 2012. Mantosh Sondhi, Secretary-Ministry Heavy Industry, spotted RJS to take charge of AL. This proved to be a turning point in catapulting Ashok Leyland to the national plane.

A rich blend of public and private sector excellence…
RJS was a great blend of the best features of public sector and private sector management. He brought with him an enviable record of revamping the operations of the engineering giant Jessop & Co, Kolkata, that was a large producer of rail wagons. The British- promoted company turned sick and was taken over by the government.

With his familiarity with the engineering industry, RJS diagnosed the problems of AL, especially lack of quality managers and access to capital.

The team builder…
One of the first tasks he took was to strengthen the management team.With his familiarity of the talent pool available in the public sector, he recruited brilliant leaders like S V S Raghavan (who was unceremonoiusly thrown out of BHEL’s chairmanship in 1978), Joy Joseph, ex-Finance Director of IndianOil, T S Kannan, past chief executive of Richardson and Cruddas… These enthusiastically teamed up with RJS. He also recruited brilliant young executives, especially chartered accountants – R Seshasayee (RS), T Ananthanarayanan, S Nagarajan… and engineers like R Jagannath.

Financial Engineering…
The finance duo looked at the opportunities for funding. These included special loans from IDBI, making use of the attractive sales tax concessions offered by Maharashtra and Rajasthan also accessing the International Finance Corporation!
The genius of RJS lay in drawing the best out of his young team as also looking at national and international opportunities.
These experiences were pretty new for the industrial scene of Chennai dominated by family-owned enterprises. It was characterised by low capital base, modest incremental growth with small capex. RJS pulled AL out of this culture and drove the company in the top gear to the national and international plane. RJS also brought the public sector culture of transparency and accessibility through regular press confe-rences.

However, the cyclical fortunes of the auto sector did impact this ambitious expansion. The recession of 1981 delayed this foray; but once the business cycle turned, AL forged ahead.
Socialist leader George Fernandes as Minister of Industry in the Morarji Desai-led Janata government (1977-79), enacted a policy that stipulated companies with foreign holdings reduce these to 40 per cent with exception of a few essential categories. (Remember, Coca-Cola and IBM opting to quit India not willing to comply?)
With widespread industrial unrest, Britain was experiencing a steep decline in its auto sector. British Leyland that had around 71 per cent holding in AL was in itself going through tough times. British Leyland was looking out to sell its share in AL.

Several suitors…
There was wide interest on the part of several business houses to bid for Ashok Leyland. These included the Hindujas, Chhabrias and Bajajs. RJS’ team favoured the Hindujas in preference to the family-controlled Bajajs’ bid though the latters’ bid was higher. The other choice made to take Iveco of Italy as technology partner in preference to MAN of Germany did not last long.(MAN had wide interests ranging from steel, heavy vehicles, locomotives, mining, printing…It had a long association with BEML, WMI… MAN’s technology was used to produce heavy vehicles for Defence. Over 50,000 Shaktiman trucks were produced at Jabalpur. (On hindsight German company could have been a better choice.)

The Hindujas acquired the share of the British company and gained majority control. In the initial years, the Hindujas were content to leave the management to RJS and his team and drew on their rich experience in expanding the Indian empire. Dheeraj Hinduja, mentored by RJS and Seshasayee was getting ready to take charge.

I have had close and continuous interactions with RJS, Seshasayee and other senior executives for several years. An aspect I admired most in RJS is his humour. Look at this instance: in January 1995 after the IE Business Excellence Award Committee headed by Dr M S Swaminathan selected AL for the 1995 award, I conveyed the news to RJS over the phone. Listen to his response: “Vish, how did you commit this mistake?”

RJS received the award at the annual BEA function and narrated the high points of excellence at AL. RJS was a member of the IEBEA committee to select the awardee for 1996. He participated in the award function on 30 March 1996 at which
Dr Manmohan Singh was the chief guest.