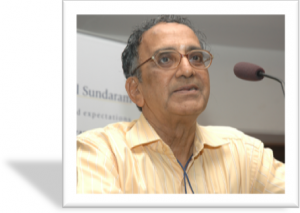 Since 1973, SV has been invited continuously, without break, to attend the annual Economic Editors’ Conferences at Delhi inaugurated by the Finance Minister and addressed by over a dozen Central ministers and senior civil servants. He thus has the unique record interacting with policymakers for 44 years!

SV has also been invited several times by foreign governments/institutions to cover specific projects and programmes: by the government and industry of Germany, by the British
Foreign & Commonwealth Office, by the International Visitors’ Programme of USA, by the French government, the European Commission, the FAO….

Due to SV’s efforts in the capacity of a founder and Secretary General of the Madras Press Club in 1976, periodicals were also provided with press accreditation.

SV has participated in dozens of All India Radio and television programmes in Doordarshan, Sun TV, Thanthi TV, Puthiya Thalaimurai TV, CNN-IBN and All India Radio… He has also been writing articles in Times of India, Tamil daily Dinamalar and Tamil weekly Thughlak.

SV covered the Prime Minister’s visit to Washington in August 2005 and was part of the PM’s media delegation that visited UK and Finland in October 2006.

SV has been invited by the Zaheer Science Foundation to participate in its national and international seminars. In this forum of scientists he has been the only non-scientist!

A specialist writer on agriculture, SV took the initiative to set up the Agriculture Consultancy Management Foundation (www.agriconsulting.org) in 2006 to improve agri productivity taking recourse to science, technology and management by setting up a demo farm. The trustees and advisors include well-known businessmen and public figures

SV built his knowledge and expertise on extensive visits to places and interactions with a wide spectrum of people. He has travelled extensively within the country covering remote interiors of several states. Except Jammu & Kashmir and five of the north-eastern states, SV has covered the rest of India in detail. Similarly, he has covered over a hundred projects in Germany, Britain, France, Japan and especially the US where he has visited over 20 states in detail. These have helped him gain insights on development, agricultural and social issues.

The Golden Jubilee of IE was celebrated recently with a daylong seminar on the theme India 2030. Over 40 experts- policymakers, business leaders, academics and professionals participated.

SV is married to Padma. Their son Bala and daughter Sangita, trained at IE, educated and work in the US.