THE COVID19 HAS taken the world by storm. Nations are trying to grapple with the situation; economies are going for a toss and everyday life is being altered every bit. Lock-downs and their extensions have become routine. Staying in Sweden and witnessing these make a different-planet feel. Yes, Sweden has no lock-down and people are not restricted much. But that does not mean that the cases are any less. Let me dive into the details.

Sweden has followed a different strategy to contain the virus. Instead of forcing people to stay in- side, the Swedish strategy is based on voluntary cooperation and individual responsibility. In Sweden, it is not the political class that makes the decision on a lock-down. The State Epidemiology Department is in charge of this and its head Anders Tegnell gives out recommendations to curtail the virus spread in the country.

Sweden has roads bustling with people enjoying the sun after six months; restaurants are full and public transport runs normal. Companies that can offer work from home are encouraged to do so. High schools and universities have shifted to online classes while till middle school, children keep going as usual. But the onus is on the people to maintain social distance and also self-isolate if they are in doubt on having been affected by the virus. The entire model works on a system of trust and self-responsibility.

In a rare appearance Prime Minister Stefan Löfven addressed the nation on 22 March when the virus outbreak had started. He stressed the need for everyone to take individual responsibility and, importantly, asked adults to behave as adults and not spread panic or rumours.

The belief in self-responsibility seems to work for Sweden. This allows for the possibility of more than half the population developing immunity to the virus. Sweden has a population of 10 million and the population density is much less. As on 27 April, there were 18,640 confirmed cases and 2194 deaths, that is, 1803.85 cases per million. Most number of cases is registered in the densely populated capital Stockholm. But since 24 April, the number of cases has seen a downward trend and the state department expects herd immunity will be achieved within the first few weeks of May.

WHY DOES THIS WORK IN SWEDEN? 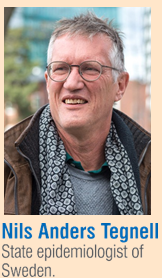 Sweden believes that in the absence of a vaccine, herd immunity is the best way that would benefit the people in the long-term. The aim of the government is to protect the vulnerable and the old. This country has the largest number of people living separately. So, it decreases the effect of an active adult bringing home the virus and infecting others. With middle schools functioning, most parents can afford to attend to work. Shops and other establishments are kept open to keep the economy running. But several places have seen the footfalls decreasing; that shows that people do social distancing without state enforcement. The high death rate comes mostly from old age homes or care homes as they call them here. This section of the population was the one that the government had targeted to protect but this vulnerable group has borne the brunt.

Tegnell had acknowledged this flaw and had said that they were striving to address this problem. If as projected, Sweden develops herd immunity, it would be easy for them to activate the economy. This should be easier than recovering from a full lock-down.