You are here
Home > In The News > The final call

This sector is in the news again. Latterly, voluminous anecdotes of competition, controversies, complaints, crashing success and colliding failure made the sector a bustling one. The Adjusted Gross Revenue (AGR) case which is being meticulously scrutinised by industry experts, investors and many individuals gave special effects to the sector. Yes, it is none other than Indian telecom sector.

The Indian telecom sector is broadly a three-player market dominated by private service provider Reliance Jio, Airtel and Vodafone Idea (recently launched new brand identity Vi) are the mega players and BSNL is the only PSU in the fray. These players are impacted by soaring consumer needs, intense competition and regulatory rigours. Furthermore, investment activities of marquee investors such as Silver Lake Partners, KKR, Facebook joined with the grapevine of probable interest from Abu Dhabi Investment Authority, Microsoft and Google… made the sector fascinating and elevated its status globally.

The Court rings the bell…
For utilising the spectrum possessed by the government of India, all the telecom organisations function in India have to pay a portion of their incomes towards a licence fee and spectrum charges to the DoT. 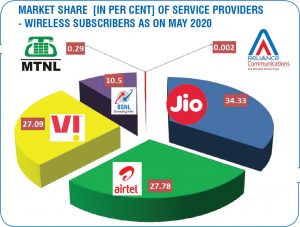 The Adjusted Gross Revenue (AGR) issue has been playing long innings for nearly 20 years now. According to the definition of AGR, all the revenue grossed by the telecom companies have to be factored. This also comprises non-telecom sources such as deposit interests, sale of assets…The definition was dissented and confronted by the telecom companies in numerous discussions and debates. Previously on 24 October 2019, the Supreme Court upheld the DoT’s definition of AGR and granted three months to all telecom companies to unclutter their AGR fees. The telecom firms litigated to reassess the verdict; but it was dismissed by the top court which mandated that the concerned companies should clear all the dues by 23 January 2020. However, considering adverse effects of the verdict on telecom industry and plentiful appeals by the telecom syndicates and the DoT, the Supreme Court agreed to hear the cases on an amended timeline. But the Court declined to re-evaluate the quantum of dues payable by the companies.

On the first day of September 2020, forbidding revaluation of AGR payments, the Supreme Court of India granted 10 years to recompense their unsettled AGR fees, comprising interest and penalties above the spectrum charges and licence fees. The court has also instructed the companies to pay 10 per cent of the dues upfront. Earlier the Department of Telecommunications (DoT) suggested a 20 year schedule to repay the dues.

The period starts from 1 April 2021 and ends on the 31 day of March 2031. The non-payment of dues in any year will result in accrual of interest and attract contempt of court procedures against such entities. The managing directors of the telecom establishments are made accountable to disburse the AGR; they should provide a personal guarantee within four weeks from the date of judgment. All the telecom companies and the DoT should report compliance of the court order every year on 7 April. The Court has also held that the National Company Law Tribunal should decide whether or not spectrum can be sold according to the Insolvency and Bankruptcy Code (IBC).

No self assessments…
Similarly, dues to the extent of Rs 40,000 crore from bankrupt companies were also recognised by the judgment. As per the judgment, Reliance Communication owes Rs 25,199 crore, Aircel Rs 12,289 crore and Videocon Rs 1376 crore. The self-valuation of AGR dues by telecom companies showed less dues compared to the demand of the government. For example, BhartiAirtel claimed AGR dues payable to the government at Rs 13,000 crore and did not see them beyond Rs 18,000 crore, which is a far cry from the government’s estimate. In March 2020, a three-judge bench of the Supreme Court pronounced that no additional protests would be permitted on payable dues of telecom companies. Moreover, it said that no self-assessment by the entities themselves would be accommodated.

According to the reports of Jefferies, a financial services company, the decision of the Court will stimulate further rationalisation: it is of the view that Vodafone Idea has to raise tariffs by 27 per cent to address the impact the of AGR dues. The present EBITDA of the entity is approximately Rs 6100 and although the estimated collaborations may increase it to Rs 10,000 crore, it still falls short of to repayment of the AGR dues. In addition, anticipated 5G spectrum auction next year will surely make the company’s balance sheet weak. The company has said it is no position to give new bank guarantees for repayment of AGR dues.

Time to select a new ringtone
After a long wait, the AGR verdict has brought climax to the issue of statutory dues. Now the telecom industry can move ahead with robust business strategies and focus on profitability. The government has to lessen the arduous or exorbitant duties or charges and emphasise on ease of doing telecom business in India.

The Department of Telecom should immediately implement rapid decisions on the basis of suggestions given by the Telecom Regulatory Authority of India [TRAI]. Countless measures suggested by the TRAI to DoT remain unattended. Now is the right time to implement these as also the provisions of the National Digital Communications Policy.

Delay in this regard will result in massive economic costs and the country’s vision of digital transformation will be jeopardized.