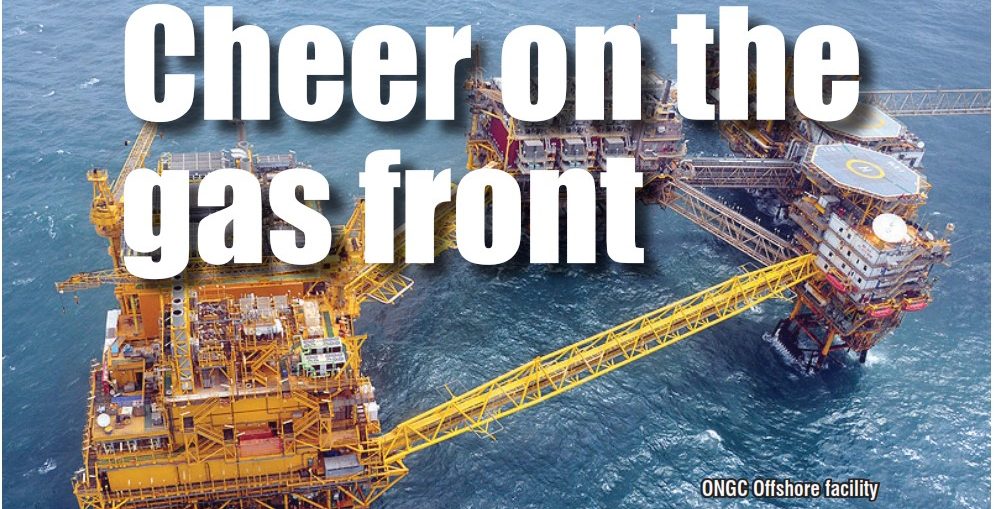 Reliance Industries and BP has announced that commencement of production at the ultra deep water gas field in the Krishna-Godavari Basin of Andhra Pradesh. Of the three blocks developed at an investment of around Rs 35,000 crore are expected to produce a total of 30 MSMCMD by 2023. The first of these, the KG-D6 block which has commenced production, is expected to produce 12.9 MSMCMD in 2021.

Reliance invested close to Rs 30,000 crore in developing off-shore oil fields at the KG Basin during the first decade of the current millennium. In the ensuing months production expanded rapidly and peaked around 60 MSMCMD in 2009. Reliance had ambitious plans to set up large capacity fertilizer and power plants as also use gas as fuel and feed. At considerable expense, the company also constructed a gas pipeline from Kakinada in AP to Baruch in Gujarat for 1400 km.

The low price for gas at $ 4.20 per 1000 BTU and the government taking over the gas produced for allotment as per its priority, combined with the difficulties encountered by Reliance in sustaining production. At a time when international prices zoomed to around $16 per 1000 BTU, freezing the price at $ 4.20 was also unattractive.

Not just Reliance…The great expectations on ONGC, Carin, GSPC and Andhra Gas Corporation producing gas in abundance from the KG Basin did not materialise.

Reliance inducted BP as a partner to lend its technology and resources and focused its efforts on deep water exploration.

The rich infrastructure earlier created by Reliance for processing and handling gas at the KG Basin would also come in handy and reaching it to the shore as also in connecting it to the Kakinada-Baruch gas pipeline and thence to the national gas grid.

The reforms of gas pricing and marketing also provide the freedom for gas producers of more rational pricing.

This development is at the base of the optimism of Union Minister for Petroleum & Natural Gas, Dharmendra Pradhan, over natural gas consumption rising three’ fold over the next ten years. Natural gas currently estimated to account for 6.2 per cent of all energy consumed.  By 2030 the government targets its share to increase to 15 per cent.

The current consumption is estimated at 166 MSMCMD with roughly half contributed by domestic production. Pradhan said that a massive $ 60 billion is being spent to expand gas infrastructure to meet this target through building LNG import terminals, laying pipelines and expanding city gas distribution networks. Natural gas is a much cleaner fuel as also much cheaper than liquid fuels like diesel and furnace oil. It was thus been helpful in reducing carbon emissions.

India presently has 38.8 million tonnes of LNG import terminal capacity. This is being expanded to 52.5 million tonnes over the next four years. There are also plans to expand the existing gas pipeline network from the present 16,800 km to 31,500 km.

The Union government has undertaken major reforms in providing natural gas/LPG as domestic fuel. The focus on providing cooking gas to the households and gas distribution networks to sell CNG to automobiles had received great impetus. The present plan to provide piped gas to a number of cities and towns will be aided by the expansion of the gas grid and the award of contracts for distribution through pipeline to a number of companies. Torrent Gas has won the bid for supply of gas to Chennai and Tiruvallur districts and IndianOil to Coimbatore and Salem in Tamil Nadu.

Tamil Nadu has been missing out on the huge opportunities provided by encouraging industries based on natural gas. In 2010, the Parliament passed bills to construct a national gas grid and entrusted the task to the public sector GAIL and Reliance. With great expectations on the KG Basin producing copious volumes of gas, Reliance won the bid to lay the gas pipeline from Kakinada-Chennai-Tuticorin and Chennai-Bengaluru in the south as also construct the pipeline from Kakinada to Kolkata and thence Kanpur.

After Reliance abandoned these schemes Tamil Nadu lost the opportunity to switch to gas in a big way and in quick time. With uncertainty over KG Basin, the government entrusted IndianOil to set up a large gas terminal for importing CNG. With familiarity to switch to gas there is bound to be a quick and big expansion in the demand for gas. The Tamil Nadu government would do well to look closely at the elegance, economy and scope for large scale investments in gas and bid for a good share of the copious production at Reliance.

We offer single annual subscription at Rs 200. Click the below link for payment http://bit.ly/2T95ust.

For bulk annual subscription, 12 numbers, it is just Rs 2000. For payment click the link https://bit.ly/2G9V6ya